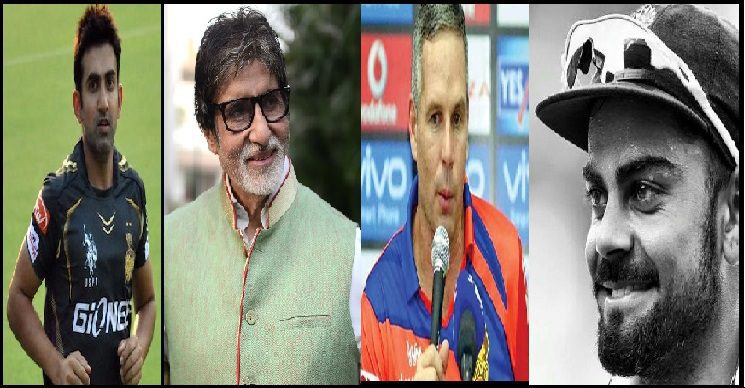 Since the beginning of the 4th Test match between India and Australia, social media has been seen accompanied by many stories. Starting from the Australians mocking Indian players and sledging Jadeja during critical play time of the game and even the worst that happened is the Australia media mocking Virat Kohli by comparing with US president Mr. Trump by portraying him in an unethical way. After all that happened, its India the victorious team in the two and showcased a formidable comeback. Seeing all these incidents there were replies from various people and these two of them are stand out. Its Mr. Amitabh Bachchan, the Big B thrashed Australia media with his sarcastic tweet. The Badshah of Bollywood very actively trolling the haters on Twitter with timely tweets.

T 2471 – Aussi media calls Virat, Donald Trump of sports !! … thank you Aussi media for accepting that he is a winner and the PRESIDENT !! pic.twitter.com/ZOoNtuhtC2

Australian media tried to diminish Virat Kohli fame by calling him “The Donald Trump of Sports”. Poor them, trying to place a negative shade on Virat, but the savior Mr. Amitabh Bachchan had other thoughts. He acknowledged the media and gave a befitting response glorifying Kohli as well as the president of United States.

T 2477 – Brad Hodge says 'Virat skipped 4th to play IPL' .. RUBBISH ! he did it to tell you that his team can wallop you even without him ! pic.twitter.com/FVxFpYcgEq

The next thing is Gautam Gambhir came in full support to Virat Kohli and thrashing Brad Hodge, former Australian spinner. Brad Hodge is currently the coach of Gujarat Lions gave an ill speech stating Kohli ignored the 4th test to play for Royal Challengers Bangalore (RCB) in the IPL. Here is what Gautam Gambhir replied to Brad Hodge.

“That’s absolutely not valid. I feel that someone who’s playing for their country and captaining it would never want to miss a Test match and would definitely want to play for India more than any other tournament. That’s always been the case. Knowing Virat he would have never done that and these people, look if you want to be in the headline you can say anything you want and it’s just about making a headline or trying to get your name in the press by making such statements. If you don’t know the extent of the injury you should not be talking about it.”

Really happy and delighted to see the grit and determination of this guy. Well done Puji @cheteshwar1 for an outstanding season brother. ✌️😎 pic.twitter.com/5ACBZwmB2A