The previous episode of this story is here, Love behind the Nuptial Knot – Episode 4.

Marriage is not just a phase of life, that carries us from our home to somewhere else, that teaches us how to cook and clean, that offers us an opportunity to socialize with a person of our choice!

Its, of course, a delightful commitment between two, their families, their soceities. Its capable of turning our lives into a better, happier one only when the nuptial knot is tied and accepted willingly!

Abhi, who was expecting so much was deceived and had to accept with pain in her heart.

The day of marriage was near the corner and both families were happily engaged in the festive preparations. The way in which parents organize their children’s wedding is just not to boast but to express their happiness. Admist the pain of parting their loved little birds that are about to fly away from the nest, they are proud that they are going to scale the skies! Subramaniam was no exception.

He did his best to make it a grand wedding. He took great care that everything, feast, ornaments, gifts, traditional outfits and arrangements were fine and flawless. What wouldn’t a loving dad do?

However being the bride, Abhi was not feeling complete because of her sorrow. She felt something was missing. Yes! She couldn’t forget the stern look on Sridhar’s face when her dad conveyed her acceptance to them. He became tensed and his disappointment was so apparently expressed. Before leaving their house, he turned back at her and stared! How hurting it was!

And from then he gave some excuses for not being present in shopping, giving invitations and so on. Being a busy business man no one doubted his negligence. All but not Abhinaya who bore this with a heavy heart.

And Today the Day of Marriage has arrived. From early morning all customs were carried on and finally Abhinaya found herself sitting beside Sridhar. Without anyone noticing, she got the glimpse of his Expression-less face. He is grim looking and obeyed the priest who asked him to repeat his mantras.

Before long, Sridhar tied the Nuptial knot around her neck and they became man and wife! From that momemt they are no induviduals. They are bonded to each other and are destined to share and care for each other. Abhi watched her Dad’s contentment in his face. She thought to herself “this is enough dad… I am ready to bear anything to make this joy stay in you forever!”

After being blessed by all elders they had lunch and went to temple.

Special poojas were done on behalf of this young couple and Sridhar was asked to keep kunkum on her forehead. After a long while abhi picked up her guts to look at him. But Alas, He showed no love for her. It was so apparent in his eyes. Only a loving heart can see the presence and absence of love in their eyes. Abhi felt it!

It was a fascinating beach house with a big garden behind it. The gates opened for them to enter and Abhi stepped inside with Sridhar.

When they arrived to home, she could clearly hear many speaking” what a lovely pair they both make! Many would have cast their eyes on them”! Abhi’s naturally rose cheeks blushed on listening to it.

It was turning dark and everyone left the home leaving them alone. Pushpa who was the last to go came near abhi. “ Abhi, you are so special to us. You won’t find it difficult to get along here. I see you as My daughter and will treat you so forever. Sridhar is very responsible and a caring person. Dont think that I am praising my son but you will soon find this out yourself! I am happy that I have found the right match for my son! take care dear. We are leaving to our house in Coimbatore. You both stay here for a couple of days and then come!”

Also Read  IF YOU CAN UNDERSTAND THESE THINGS, YOU WILL NEVER PROCRASTINATE IN YOUR LIFE EVER

“ya, Your son is too caring aunty“ Abhi wanted to say. But she didn’t. Dressed up simply but beautifully she came to their room. She found him with folded hands staring at her standing near the balcony. ………. (to be continued) 🙂

The Next episode of this story is here, Love behind the Nuptial Knot – Episode 6. 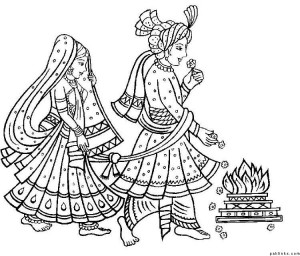